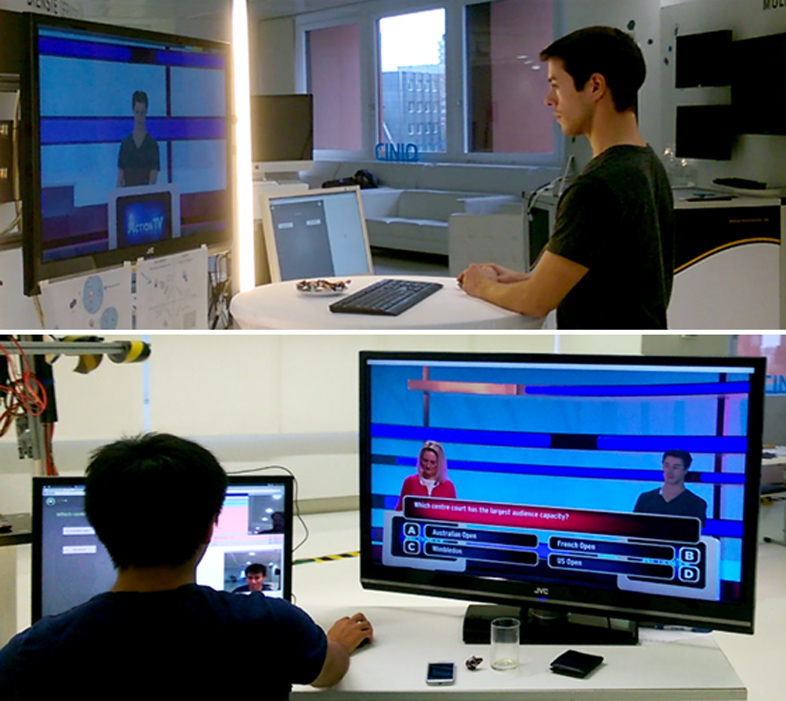 The aims of this integration session were to test the system components developed by ACTION-TV consortium partners to be integrated and tested under end-to-end demonstration scenario. During the integration event a user test with nine participants was conducted by HFC to evaluate the users’ impression regarding the different aspects of the demonstration scenario: Active participation, peers’ get-together, and passive TV watching. Three groups, consisting of three acquainted persons each, took part in the test.

Before the test session, each group of participants received instructions explaining the procedure and their task. They filled in a questionnaire on demographic data and we asked about their affinity for technology as well as their regular social media usage. After each test trial, participants received a questionnaire containing items to assess how they felt during this group exercise – the so called ‘shared user experience’. At the end of the whole test session, participants had to fill in several additional questionnaires and were interviewed.

Four out of six participants who took the role of the active candidate performing the quiz round at some point during a test session named the respective round as their favorite for that very reason: Being active candidate was appraised to be experienced as ‘something new’. There seems to be a certain appeal to participate as an active candidate. The fully integrated ACTION-TV quiz scenario (condition a) was chosen as favorite by four participants. However, as a means of communication, participants still preferred a common conversation on a couch (condition c), which was chosen as favorite by six participants. Overall, participants described their shared experience with, e.g. ‘funny group experience’. Sitting at home while participating in a TV game show with others was stated to be a simply good idea, novel and cool.