INTUITIV is a BMBF-funded joint project in which HFC teams up with the German Research Centre for Artificial Intelligence DFKI, GESTALT Robotics GmbH, Johannesbad Saarschleife AG & Co KG and the project lead E&K Automation GmbH. The main goal of the project is the development and optimization of nonverbal and verbal means of communication for robots in the context of robotic assistance in rehabilitation facilities and hospitals. By shaping the robotic behaviour to be as intuitive and easy to understand as possible, we strive to increase both the efficiency of these robotic assistants and the acceptance they receive by professional caretakers and patients alike.

Specifically, three different robotic platforms are being constructed, whose behaviour will be designed for maximum readability and predictability, based on the scientific state-of-the-art and several empirical studies. In addition to a classical stationary robotic arm supporting healthcare personnel by handing over equipment during treatments like bandage changings, two mobile platforms capable of autonomously navigating through the entire hospital building are being developed. The first of those two mobile robots is a transportation robot which will help staff and patients by moving heavy load (e.g. big suitcases), while the second type of robot is a rollator that – in absence of an active user -is capable of driving through the hallways on its own, in order to get to another patient or to reach its own charging station to power its batteries up again.

When it comes to the interaction between humans, predictability of all parties involved is an important factor for successful cooperation: The only way to successfully adapt one’s own behaviour to that of others is to be able to gauge the intentions of those other agents correctly, therefore allowing for a rough anticipation of what the others agents might do next. This is especially true and important for directly cooperating with one another to complete a shared task, but predictability is still relevant even for sheer coexistence, where each of the agents that are in proximity to another actually only want to continue their own activities undisturbed. Additionally, the subjective feeling of being able to assess all relevant agents in ones vicinity can prevent feelings of tentativeness or even anxiety, as it enhances the perception of oneself as “being in control” and not being threatened by unpleasant surprises.

If one is considering to introduce robotic platforms as autonomous agents in public spaces, it is imperative to closely examine the question whether the robotic behaviour is sufficiently intuitively readable and predictable to humans. This is especially important if the human agent and the robot meet only by coincidence and without further introduction, as is the case when the meeting takes place casually in a hallway. To make sure that human and robot can coexist safely and undisturbed by one another, and in order to avoid discomfort for the human stakeholders, it is unavoidable to design the robots and their interactions with humans in a way that is intuitively understandable and predictable.

A major focus of HFC’s participation in the project is on planning, conducting and statistically analysing the user studies which accompany the development of all three platforms from the earliest possible moment on. The set of empirical studies consists of three separate endeavours: In an early study, HFC conducts a simulation study using state-of-the-art VR technology, in which participants meet a virtual robot in a virtual hospital hallway. In this immersive and yet well-standardisable setting, we examine if different movement strategies and trajectories of the robot influence the perceived intuitiveness and the approval for the robot. Additionally, different additional non-verbal supporting cues for communicating movement intentions are being tested (e.g. arrows on a display).

A second empirical study consists of so-called Wizard-of-Oz-experiments that are conducted within the main building of the rehabilitation facility Johannesbad Saarschleife. The robotic platforms are outfitted with remote control capabilities, which allow a human operator to realistically simulate actions and processes that later on will be performed autonomously by the robot. This enables the participants to interact with an seemingly fully-functional system and evaluate it accordingly, without having to imagine all the functionalities that are not implemented yet.

The data and insights gathered from the first two studies will be used to shape and inform the development of the actual robots. The last of the three empirical studies consists of field-tests with patients and healthcare staff at the Johannesbad Saarschleife rehabilitation facility, to evaluate all three autonomous platforms under realistic conditions regard the quality of their final implementation. 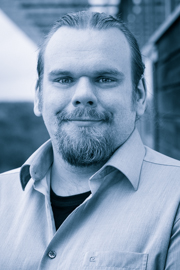