TUSIMA is a research project carried out in cooperation with the InterOffice GmbH and funded as a part of the PRO-INNO program. 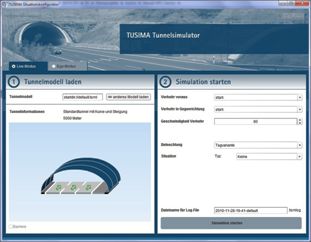 The aim of the project was the development of a generic tunnel simulator, with which assertions could be derived about a tunnels safety potential regarding the safety risks associated with human traffic participants. The primary merit of the future simulator had to be its adaptability, so it could quickly be modified to fit any existing or planned tunnel constructions. Variations of the geometry or the equipment of the tunnel, including different lighting options, were required to be implementable, in order to evaluate their effects on potential traffic percipants and their respective levels of stress.

The latter was achieved by using simulated behavior derived from a model of human behavior, which was based on a on a series of experiments with a cross-sectional selection of participants in a variety of different tunnel configurations. The acquired data about the behavior and the stress level development of the subjects was integrated into the model integrated.

The results of the project TUSIMA represent a new, groundbreaking direction in the field of real-time simulation of tunnel geometries and human perception. The tunnel simulator used in this project is unparalleled in terms of its special focus on human-relates safety factors and opens up completely new possibilities for the security-enhanced planning of traffic tunnels. Particular attention was directed to the realistic simulation of factors inside the tunnel which influenced drivers, as well as the resulting changes in driving behavior during tunnel passage. The results of the project at a glance include: